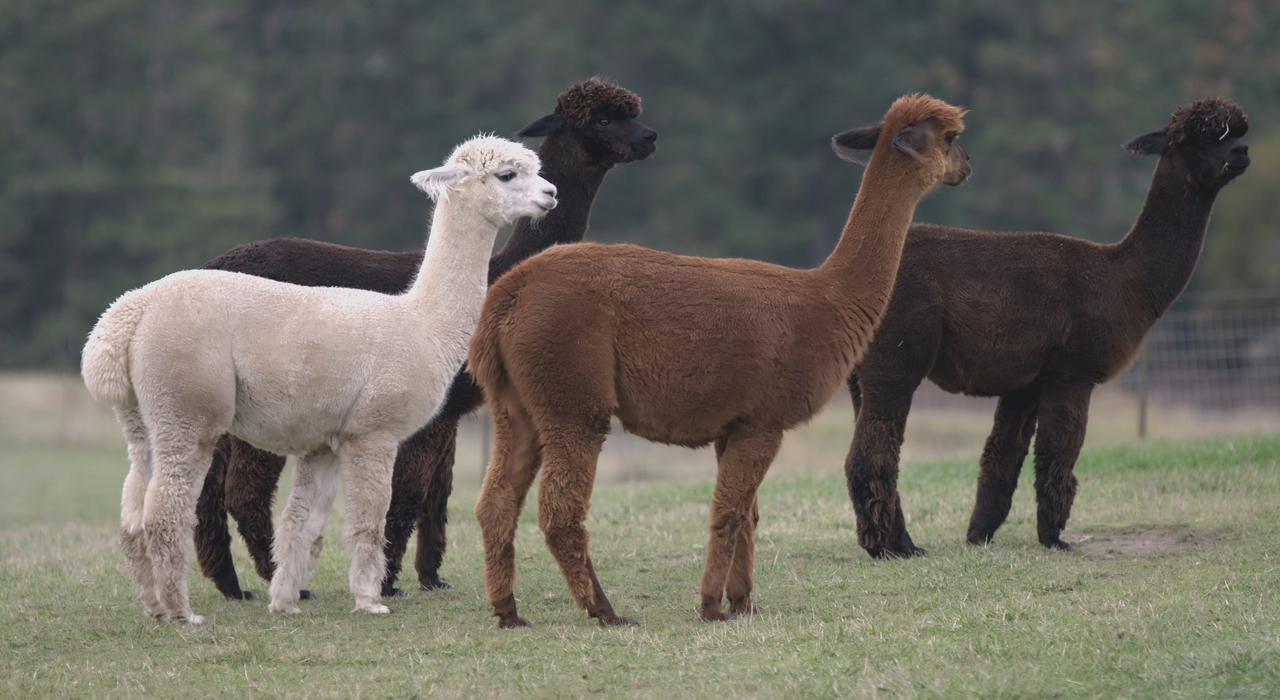 Alpacas are shorn once a year, usually from early September to end of January. Shearing is the biggest maintenance required and usually takes us around five to ten minutes per animal. The preferred method of shearing is to lay the animals on their side, either on a shearing table or the ground, and restrain their legs with a tether at each end. This restraint allows the alpaca to be shorn safely and efficiently.
Electric sheep-shearing equipment is normally used, but because alpaca fibre is non-greasy, care needs to be taken that shears do not over-heat. Depending on the density of the fleece, alpacas cut anywhere between 1.5 and 4 kg of fleece. Some of the high quality stud males will cut higher weights.
Ian’s technique ensures he is quick, but with minimal second cuts. Most of the skirting is done on the table and the saddle comes off the alpaca in one piece or two pieces depending on owners preference. The alpaca table is state of the art and ensures minimal risk and stress to the alpacas and workers. The team are always updating their equipment and using the best gear to do the job.

What makes a good alpaca shearer?

There are a few key principles to becoming a good alpaca shearer. The first is taking off the fleece in one go and keeping the cut as close to the skin as possible with minimal second cuts. During this process of keeping the comb on the skin, you keep your skin nicks to a minimum. A nice clean finish with the ultimate goal that every alpaca or sheep can be thrown in the show ring straight after shearing. Speed and efficiency are the final components to becoming a gun shearer.

Our promise to you.

Here at Elkins Alpaca Shearing we do our very best to provide our customers with the best saddle fleeces, this is reflected by a lot of our clients winning awards in the show ring. We always focus on our relationship with the customer. We are not just interested in the number of alpacas we are doing a day, but rather making it a pleasant experience for you and the animals. We take time to listen to you and how you want your animals to look, as well as how you would like your fibre separated. Finally, because we always work as a team, we can ensure less stress on you, and equally important, less stress on your animals.

South Coast – Becoming a hot spot for alpacas, the team are down the south coast of NSW every 3 weeks between October and February with one major run in the middle of November for a week. Jobs start as far north as Dapto running as far south as the Victorian border and every town in between. message Ian 0417496815

Southern Highlands – Ian and Mick shear a lot of alpacas in the highlands and travel there every second week for a few days at a time. They visit Camden, Bowral, Wilton, Canyonleigh, Robertson, Kangaroo Valley, Moss Vale, Marulan just to name a few.

High Country – Cooma, Shannons Flat, Jindabyne, Numeralla, Nimmitabel, Bombala, Cathcart, Dalgety , Berridale, Adaminaby. Ian and Mick usually do a run first week in January due to the colder climate. They currently have over 30 jobs in the area and gaining more every year.

Canberra region – Bungendore, Captains Flat, Royalla, Michelago, Tarago, Sutton, Murrumbateman, Yass, Burra, Braidwood. Usually these jobs can be done within a week of your phone call depending on the size of the job.

If your area didn’t pop up above please give Ian and Mick a call as they are expanding and have had a lot of phone calls from the central coast, Bathurst, Orange, Mudgee and hope to be in your region soon. Your business is important to them and they would welcome a friendly phone call.